How Would You Pop! 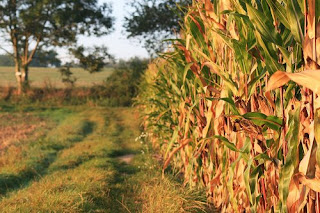 Behold, at the time of the harvest, the ears of corn did bring forth kernels which were dried band prepared for the poppers hand.

And then it was that the popper did take the kernels, all of which appeared alike unto him, and did apply oil and the heat."

And it came to pass that when the heat was on, some did explode with promise and did magnify themselves a hundred fold.

And some did burst forth with whiteness which did both gladden the eye and satisfy the taste of the popper.

And likewise, some others did pop, but not too much."

But lo, there were some that did just lie there and even though the popper's heat was alike unto all, they did bask in the warmth of the oil and kept everything they had for themselves."

And so it came to pass that those which had given of themselves did bring joy and delight to many munchers....but those who kept of the warmth and did not burst forth were fit only to be cast out into the pail and were thought of with hardness and disgust."

And thus we see that in the beginning all appear alike, but when the heat is on, some come forth and give their all, while others fail to pop and become as chaff to be discarded and forgotten."

Each day we find ourselves faced with the decisions of how well we will perform. Our Father in Heaven applies the "heat" of the assignment and expects us to yield our best.

We can choose to give our all and bring forth satisfactory results, we can hold back some of what we should give and feel our regrets and lack of fulfillment, or we can choose to do little or nothing and eventually be thrown out.

The choice is ours each day. How you "pop" determines where you end up in the bowl.

What a wonderful way to bring forth this story. May I POP right today and yield something 100 fold for the Father

thank you, again, for the award...I've finally passed it along ;o)

Thanks for your kind words and great illustration using popcorn! Oh, to become a beautifully white and fluffy piece of popcorn! That is my goal!

Hey Sistah's
I loved this as well, I'll never look at popcorn the same again after this story. *smile* I too want to be the white and fluffy ones giving the Lord a 100 fold. Nothing but the best for my Jesus. Hugz

wow, what a great picture. we all start out the same. i pray that during this time of "heat" i become something people want more of, not something to be discarded. you have such a way with words and i'm grateful you share it with all of us.

Hi Lorie!
What a great analogy of our walk with the Lord. It's tough feeling the heat of His discipline and challenge to grow, but without it we just remain a kernel. I always feel so uplifted when I visit you! Thanks so much!
Love, Velvia

I cannot thank you enough for the prayers regarding Mike. In 24 hours to go from what seemed hopeless to what is etched with HOPE I am in awe and stunned at the grace and power of Christ.

Thank you for joining me.

I love the popcorn analogy...but as I was reading, I was thinking...but I like the ones that don't fully pop...you know the hard crunchy partially opened ones...I'm sure there's another analogy there...but I'm not awake enough to figure it out. LOL

Dear Lorie, I know our pastor would love this, as pop corn is his favorite food! May I copy it for him? I'll wait for your answer. You are an artist! Love, Debra