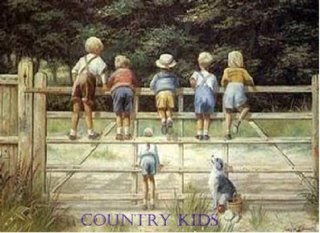 I remember growing up in a time where getting cooties or germs were the last things on our minds. We took a sip from each other's soda cans, covered the end of the hose with our mouths to see who could hold the most water in. When it came out of our nose that was a sign to stop and we would all just laugh till our belly’s hurt. We would share a piece of bubble gum, I mean literally share a bubble gum passing it on, seeing who could make the biggest bubble. Sometimes we lost the gum when one of us would get so excited and end up swallowing it, we just moved on to another adventure.

One summer day it was too hot to play so we sat in a circle watching the ants as they took things back and forth to their ant hills. We practically believed everything someone said in the group. For instance David the pastor's kid who moved to Hawaii from the states became part of our circle of friends. He stood out with his blondish hair and blue eyes amongst our tanned skin and brown eyes. Well some of us decided we wanted blue eyes just like David's, someone shouted "Hey I heard if you eat ants your eyes will turn blue.” You should have seen the sigh of relief on David’s face knowing he would not have to eat ants that day.

The rest of us boldly ate a few ants and went to sleep that night trying to image how we would look with blue eyes. Of course waking up the next morning and running to the mirror was a disappointment, no blues eyes. Later David seeing disappointment in our faces, tried to cheer us up by saying only ants in the states can give someone blue eyes, and if people wanted brown eyes they had to come eat our ants here in Hawaii. So we told David since we could not get blue eyes he would have to eat our ants so we all could have brown eyes. After a moment of silence David said he heard his mom calling and had to go home.

Oh the simple child like trust between friends back then, where we discovered and shared everything together with a heart full of anticipation. I wonder what ever happened to David and if he ever became a pastor like his Dad, or if he ever used our ant adventures in his sermons. I smile as I remember those days as a child, the simple days of my youth, with bubble gum and friends.

I dedicate this post to my children and grandchildren.

Oh what great memories. I was nodding my head along with you about sharing the hose and the gum!! Now we wouldn't think of such a thing - ha! Thanks for taking me back in my mind.

I never ate an ant, but I surely loved pretending and "play like" was a passion of mine. I could imagine a castle from our homemade rocks and board pretend houses. Yes, remembering being free to imagine and trust as a child is a fun thing. Thanks for taking me back.

How do you look with blue eyes? Ha!!!

What a lovely memory and thank you for sharing it.

Have A Fantastic Friday
from A Raggedy Roberta Anne

What a great memory and written so crisply. I don't think I've ever swapped gum as a kid, but many was the time I shared a pop with friends or a spoon as we ate the same icecream.

Your post made me smile. and Laugh! I must have eaten the Hawaiian ants! :-)

Such sweet memories! Ahhhh, the innocence of childhood.

wonderful story about young friendships. Have a blessed day.

That's hilarious, and I can so see it happening!

That was such a sweet story.
To be a child once again with the trust and a heart that believes so easily.

Those were the days...my friend.

Great story. It's funny, I was just sitting in my comfy chair the other day, no real stress or anything like that. Just tired and needed some down time. And then I started thinking about how I miss the days when my mom would say, "NeeNee, come and eat." I miss those days of innocence and carefree... My girlfriend was talking to me about how her 3 year old plays too much - Isn't that what kids are supposed to do?

From the Heart said...

A beautiful memory to give your children and grandchildren. Those were the care free days.

There's a surprize at my blog for you. Come and visit.
Luv u,
AliceE.

I love this Lorie! Thanks for taking us down memory lane with you. I had to laugh out loud a couple of times. :)

One of my childhood friends and me ate a few black ants (carpenter ants) on a dare. We decided they tasted like pepper. LOL!

lol, That is cute, Lorie. It did not take much to keep us entertained when we were young. But I don't recall eating ants! Thank the Lord. :o)

LOL Hi Sheryl..
Oh the things we would come up with as children. It was fun being outdoors instead of in front of the TV.


Kay..
We did use our imagination alot didn't we!!! Everything was a possibility to become something in our little world.


Raggedy Girl..
It was a lovely memory thanks for strolling down memory lane with me today.


Crochet Lady...
LOL we would get two bubble gums for a penny back then lol.


Hi Kelly..
So your eyes must be blue lol. I'm glad you enjoyed this post today.

Hi Beth...
Thanks for dropping by today and sharing my memories.

Hi Willnette...
Thanks for stopping by my sistah!!
I will get back to you about the hearts.

Hi Tammy..
They surely were the good ole days, ones I will always treasure and cherish with childhood friends.

Okay!!I'll meet you at the playground after school and we will do our homework together.. how about the ants???? LOL Just kidding (smiles)


Hi Sweer Alice..
Those were the care free days of youth. My daughter loves to hear me tell her my childhood days lol.

How precious are your memories. Thanks for sharing them with us.
Hugs.

Thank ya for ya sweet note. I added ya blog to my follow list I hope ya don't mind. I do like to think on sweet memories. I wish I had such sweet memories like ya do.
Enjoy ya weekend.
Hugs~

You have a wonderful way with words. Thanks for sharing this memory. Hugz to you.

What a great story, Sistah! It brought back childhood memories of collecting little frogs in metal coffee cans from the little creek. Sigh.......oh for the "good ol' days"! Yah!

Hi Cathy...
LOL it didn't take much to find things to entertain ourselves as kids, you are so right!! I don't know how many of us did venture out to eat ants, but I know others who swallowed a goldfish on a dare!! (smiles).

Edie..
The little ones did taste a lil like pepper lol come to think of it!! Thank the Lord there was no red ants around lol.


Ruthie..
Always a blessing to see your beautiful smiling face, Thanks for strolling down memory lane with me today.

Poetic Dreams..
I was so blessed to find your blog, and I too will put your link on mine as well. It is so good to meet other sisters!!!


Hi Dixie..
((hugz)) It is so good to see you, It's been awhile since our PC crafter days. I'm so blessed you stopped by today.


Hi Sharron..
Yes!!! Those were the good ole days gone by, but the memories will forever be in hearts!!!

Boy oh boy, am I smiling ear to ear.
I don't think I have ever eaten an ant, but I did gross out a few friends cracking a raw egg in a glass and drinking it in home ec.

Hmm... as for the good ole days...
I loved playing kick the can. We'd hang out on the street 4 abreast and as we walked the street we'd kick the can back n forth to eachother.
Play annie i oooover with a ball over the top of the house, and when we were broke, we'd get the wagon and gather up all the soda bottles we could find and take them to the grocery store so we could buy candy.
Ohhhhhh for the good ole days

When I was a kid, it use to be a whole gang of us who ran around and had fun. Hours and hours staying outside playing in our sandbox, on moneybars, the swings, the see-saw. Great memories. I enjoyed my childhood.
Thanks for visiting me today. My computer crashed a month ago. I understand how frustrating it is. Take care, my friend.

what wonderful memories I have of me and my childhood friends I have happy and care free time .
I love the summer nights with my friends wishing on a star or trying too catch fire fly's, marina

lol Oh this was a good one! Isn't it funny how first as children, and later as adults we follow along whatever anyone says, no matter how foolish, yet easily reject God's word?

Childhood is such a special time. I have lots of good and not so good memories - mostly good.
The link you put on Spiritual Sundays doesn't take you to this post. If you want to put it on the linky again I'll delete the first one.
Blessings,
Charlotte

Hi Lorie,
I never ate an ant but I remember pretending to play with fairies! I also remember kissing a frog hoping it would turn into a prince and whisk me away to a palace! I have many wonderful memories and many not so wonderful. I have green eyes and always wanted brown! One is never satisfied when you're a kid! Oftentimes, we're not satified with who we are as adults either. But God loves us just the way we are; that's the main thing. I'm glad I don't have to do all the work myself because I would really botch it up! Thanks for the memories.

Musings of A Minister said...

Wow! Wonderful story of friendship and youth. You are a great story teller. I loved it!

I remember when my girlfriends and I would dream about what the man would look like who we would some day marry...though we probably were picturing 'boys', since we were only girls at the time.

Then, the perfect man to marry was made so by his looks. Being a brown-haired, brown-eyed (and usually tanned) little girl, I dreamed of someday marrying a blonde-haired, blue-eyed man.

By the time I met my husband, my dreams had turned to prayers, prayers for a godly man of wisdom, compassion, and a heart after God. God answered that prayer, and the fact that I also find my hubby handsome is just icing on the cake! ;-)

Wow!!! Did that ever take me back to childhood days!!!! I remember two straws in the cherry coke at the soda fountain, sharing licks of an ice cream cone, etc. Life was all about being outdoors, getting dirty, and enjoying nature. We laughed till we hurt, ran till we couldn't go any further, and rode our bikes till our legs ached! Those were the days, believe me!
Cora

How are you feeling dear friend? I am praying for you... I love you dear sister...

Lorie, what a great story. Thanks for sharing your childhood memories with us. That was quite a tale that he made up about changing eyecolor with ants.